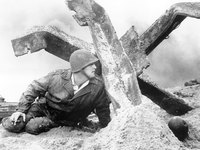 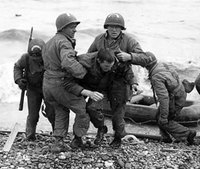 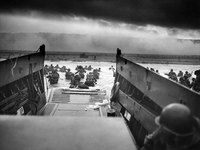 Major works:
The Longest Day • A Bridge Too Far

“He is one of those who have brought to climax that particular American excellence in the Contemporary Narrative which marks our generation as distinctively as did the dominance of Hemingway, Faulkner, Fitzgerald and Wolfe over the novel in the 1920s and ‘30s. . . . I mean the most difficult, disciplined, painstaking form of the craft of storytelling—where the imagination must deal with facts as they come raw and bleeding and unsorted, with episodes which the master must weave together to tell us of the action the way it really was.”
—Theodore H. White

“He was a man who showed enormous feeling for the fighting soldier and recorded his hardships with an accuracy and realism seldom found in contemporary writers. All of us who were in a soldier’s uniform admired him deeply indeed and thought he was one of us.”
—General Maxwell D. Taylor

Some men could hardly wait for the fighting to begin. Two Irish sergeants, James Percival “Paddy” de Lacy, who had toasted De Valera hours before for “keepin’ us out of the war,” and his side- kick, Paddy McQuaid, stood at the ramps of an LST and, fortified by good Royal Navy rum, solemnly contemplated the troops. “De Lacy,” said McQuaid, staring hard at the Englishmen all around them, “don’t you think now that some of these boys seem a wee bit timid?” As the beaches neared, De Lacy called out to his men, “All right, now! Here we go! At the run!” The LST ground to a halt. As the men ran out, McQuaid yelled at the shell- smoked shore line, “Come out, ye bastards, and fight us now!” Then he disappeared under water. An instant later he came up spluttering. “Oh, the evil of it!” he bellowed. “Tryin’ to drown me before I even getup on the beach!”

Off Sword, Private Hubert Victor Baxter of the British 3rd Division revved up his Bren gun carrier and, peering over the top of the armored plating, plunged into the water. Sitting exposed on the raised seat above him was his bitter enemy, Sergeant “Dinger” Bell, with whom Baxter had been fighting for months. Bell yelled, “Baxter, wind up that seat so you can see where you’re going!” Baxter shouted back, “Not bloody likely! I can see!” Then, as they swept up the beach, the sergeant, caught up in the excitement of the moment, resorted to the very thing that had begun the feud in the first place. He slammed down his fist again and again on Baxter’s helmet and roared, “Bash on! Bash on!”

As the commandos touched down on Sword, Lord Lovat’s piper, William Millin, plunged off his landing craft into water up to his armpits. He could see smoke piling up from the beach ahead and hear the crump of exploding mortar shells. As Millin floundered toward the shore, Lovat shouted at him, “Give us ‘Highland Laddie,’ man!” Waist- deep in the water, Millin put the mouthpiece to his lips and splashed on through the surf, the pipes keening crazily. At the water’s edge, oblivious to the gunfire, he halted and, parading up and down along the beach, piped the commandos ashore. The men streamed past him, and mingling with the whine of bullets and the screams of shells came the wild skirl of the pipes as Millin now played “The Road to the Isles.” “That’s the stuff, Jock,” yelled a commando. Said another, “Get down, you mad bugger.”

Read a passage from The Longest Day by Cornelius Ryan