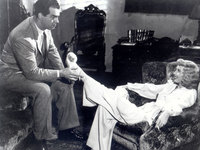 L.A. story: A dark, seductive tale of lust and murder in Double Indemnity 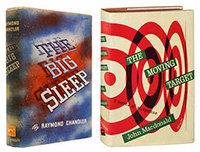 Major works:
The Big Sleep • Farewell, My Lovely • The Long Goodbye • “The Simple Art of Murder” • screenplay for Double Indemnity

At seven the rain had stopped for a breathing spell, but the gutters were still flooded. On Santa Monica the water was level with the sidewalk and a thin film of it washed over the top of the curbing. A traffic cop in shining black rubber from boots to cap sloshed through the flood on his way from the shelter of a sodden awning. My rubber heels slithered on the sidewalk as I turned onto the narrow lobby of the Fulwider Building. A single drop light burned far back, beyond an open, once gilt elevator. There was a tarnished and well-missed spittoon on a gnawed rubber mat. A case of false teeth hung on the mustard-colored wall like a fuse box in a screen porch. I shook the rain off my hat and looked at the building directory beside the case of teeth. Numbers with names and numbers without names. Plenty of vacancies or plenty of tenants who wished to remain anonymous. Painless dentists, shyster detective agencies, small sick businesses that had crawled there to die, mail order schools that would teach you how to become a railroad clerk or a radio technician or a screen writer—if the postal inspectors didn’t catch up with them first. A nasty building. A building in which the smell of stale cigar butts would be the cleanest odor.

Read a passage from The Big Sleep by Raymond Chandler