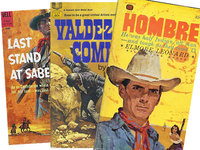 Terrence Rafferty: Elmore Leonard’s West is “an idea of the West” 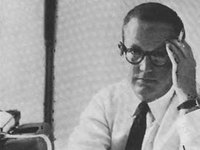 News | Story of the Week

Flashback: When Elmore Leonard, a “rising young writer of Western novels,” debuted (sort of) in The New Yorker 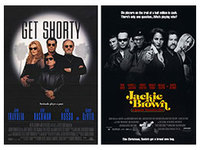 The career zenith of Elmore Leonard, “the most cinematic novelist in the English language”

Few writers are as alive to the sound of human speech as Elmore Leonard. To open one of his novels is to be plunged at once into an arena of crisscrossing voices. His characters talk, and rarely stop talking, for every imaginable reason: to seduce, to amuse, to threaten, to deceive, or simply to pass the time while waiting for a scam to unfold or a violent scheme to be unleashed. He started as a writer of pulp Western stories and ended as the most admired crime novelist of his time, but beyond any question of genre he was an observer, both unflinching and humorous, of every variety of human folly and deviousness, captured with the immediacy of a live recording whether the setting was Detroit or Miami Beach, Hollywood or rural Mississippi. If his heroes are unusually convincing, it’s because they know how thin yet crucial is the line that separates them from his rich assortment of con men, fools, and all-out bad guys.

Read an excerpt from the novel

She was comfortable with all the members of the squad, maybe with Raymond a little more than the others; which didn’t seem to make sense, because most of the time he was pretty quiet, too. But when he did talk he said unexpected things or asked strange questions that didn’t seem to relate to anything.
Like suddenly, after long minutes of silence, asking her if she had seen Apocalypse Now.
Yes. She liked it a lot.
“What’d you like about it?”
“Martin Sheen. And the one on the boat, the skinny one that almost died of fright when the tiger jumped out.”
“You like Robert Duvall?”
“Yeah, I think he’s great.”
“You ever see a movie called The Gunfighter?”
“I don’t think so.”
“Gregory Peck. It’s pretty old—it was on the other night.”
“Not that I remember . . .”
“There’s a part in it,” Raymond said, “Gregory Peck’s sitting at a table in the saloon, his hands are out of sight, like in his lap, and this hotshot two-gun kid comes in and tries to pick a fight, needles Gregory Peck, you know, to go for his gun, so the kid can make a name for himself.”
“Did Gregory Peck have a big mustache?”
“Yeah, kinda. Pretty big.”
“Yeah, I think I did see it. It was a lot like yours.”
“What?”
“His mustache.”
“Kind of. Anyway, Gregory Peck doesn’t move. He tells the hotshot kid if he wants to draw, go ahead. But, he says, how do you know I don’t have a .44 pointing at your belly while you’re standing there? The kid almost draws, you can see him trying to make up his mind. Does Gregory Peck have a gun under there or not? Finally the kid backs off. He walks out and Gregory Peck sits back in the saloon chair and you see what he had under there was a pocket knife, paring his fingernails.”
“Yeah, I did see it,” Maureen said, “but I don’t remember much about it.”
“That was a good picture,” Raymond said, and was silent again.

Read a passage from City Primeval by Elmore Leonard