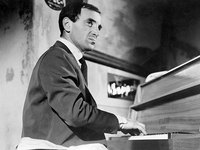 Improvisation on a noir theme: The jazz of François Truffaut’s Shoot the Piano Player 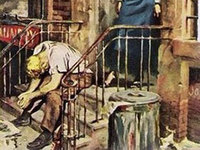 Robert Polito on the “melancholy and yearning” of David Goodis, who “always seems poised for rediscovery” 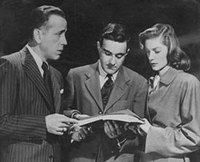 Geoffrey O’Brien and Robert Polito on David Goodis, “our most crafty and elegant crime stylist”

Major works:
Dark Passage • The Burglar • The Moon in the Gutter • Down There

His sly, resonant titles—Dark Passage, Of Missing Persons, Street of the Lost, The Moon in the Gutter, Black Friday, Street of No Return, The Wounded and the Slain, Down There, and Fire in the Flesh—distill into lyric epithets an entire iconic noir cityscape, and sentence-by-sentence, I would argue, Goodis is our most crafty and elegant crime stylist. . . . Early on in Dark Passage (1946) Goodis advanced a vernacular prose of rococo repeated phrases that limn, then all but erase his characters.
—Robert Polito

Harbin was thirty-four and for the past eighteen years he had been a burglar. He had never been caught and despite the constant jeopardy he had never been forced into a really tight corner. The way he operated was quiet and slow, very slow, always unarmed, always artistic without knowing or interested in knowing that it was artistic, always accurate with it and always extremely unhappy with it.
The lack of happiness showed in his eyes. He had grey eyes that were almost never bright, subdued eyes that made him look as though he was quietly suffering. He was a rather good-looking man of medium height and medium weight and he had hair the color of ripe wheat, parted far on one side and brushed flat across his head. His mode of attire was neat and quiet and he had a quiet soft voice, subdued like the eyes. He very seldom raised his voice, even when he laughed, and he rarely laughed. He rarely smiled.

Read a passage from The Burglar by David Goodis

David Goodis: The Moon in the Gutter (LOA ...
View all