Back Updating a life: The case of Thomas Jefferson and Sally Hemings Print
Share
News December 9, 2011

Updating a life: The case of Thomas Jefferson and Sally Hemings

The rumor that Thomas Jefferson had fathered children by his slave Sally Hemings first captured the public’s attention in 1802, when muckraking journalist James T. Callender, a former agent of Jefferson’s who turned against the president when he refused to offer him a government sinecure, wrote in a Richmond newspaper, “It is well known that the man, whom it delighteth the people to honor, keeps, and for many years has kept, as his concubine, one of his slaves. Her name is SALLY.”

For nearly two centuries, the story remained largely as it began, a rumor, one on the whole discounted by historians, vigorously refuted by keepers of Jefferson’s legacy, and tenaciously clung to by the descendents of Sally Hemings and her siblings. Reflecting the prevailing historical consensus, Merrill D. Peterson (1921–2009), in his chronology for the Library of America edition Thomas Jefferson: Writings, first published in 1984, wrote the following for the year 1802: “In July, James T. Callender, disappointed office-seeker, commences libels of Jefferson, including allegation that he fathered children by his slave Sally Hemings.” As recently as 1996, in his National Book Award–winning book American Sphinx: The Character of Thomas Jefferson, historian Joseph J. Ellis concluded “that the likelihood of a liaison with Sally Hemings is remote,” with the caveat that “unless the trustees of the Thomas Jefferson Memorial Foundation decide to exhume the remains and do DNA testing on Jefferson as well as some of his alleged progeny, it leaves the matter a mystery.”

Two years after Ellis’s book appeared, Dr. Eugene Foster and a team of geneticists conducted DNA analysis that indicated a genetic link between Jefferson and Hemings descendants: specifically, that an individual carrying the male Jefferson Y chromosome fathered Eston Hemings (born 1808), the last known child born to Sally Hemings. Of the twenty-five adult male Jeffersons who carried this chromosome living in Virginia at that time, only a few are known to have ever visited Monticello and only Jefferson himself is known to have been at Monticello approximately nine months before each of Sally Hemings’s six recorded births. “The simplest and most probable” conclusion, according to the study’s authors, was that Thomas Jefferson was Eston Hemings’s father. Most historians now agree that a preponderance of evidence—genetic, circumstantial, and oral historical—suggests that Jefferson was the father of all of Sally Hemings’s children, and this consensus is reflected, and refined, in Annette Gordon-Reed’s powerful 2008 National Book Award– and Pulitzer Prize–winning book The Hemingses of Monticello: An American Family.

To reflect this new consensus, the twentieth printing of the LOA edition of Jefferson’s writings, by far the most comprehensive single volume collection available (and also, by far, Library of America’s best-selling volume to date), will include a newly revised chronology.

Update: View or download a PDF of the updated chronology. 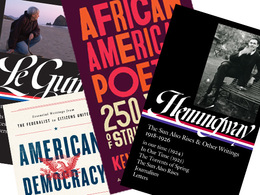