Story of the Week: Edgar Allan Poe, “MS. Found in a Bottle”

Poe’s fascination with scientific discoveries and theories, including some way-out-there ideas, provided much fodder for his writing. Several tales, particularly the story “MS. Found in a Bottle” and the novel Narrative of Arthur Gordon Pym, suggest an interest in what was then known as the Hollow Earth Theory. The idea had been around since the late seventeenth century; by the 1820s, fringe characters such as John Cleves Symmes Jr. believed that the interior of the planet was “inhabitable” and advocated for expeditions to the poles to find the entrances.

Poe never wrote about the Hollow Earth Theory itself, but he did publish several enthusiastic reviews of works by Jeremiah N. Reynolds, an acolyte of Symmes who wrote proposals for and accounts of various expeditions to the South Pole. (Poe even lifted a hefty passage from a speech by Reynolds and used it in Arthur Gordon Pym.) The writings of Symmes, Reynolds, and Poe would later provide the basis for several Jules Verne novels on journeys to the center of the earth—including a sequel to Poe’s novel.

Incidentally, another great American author found inspiration in one of Reynolds’s books, Mocha Dick: The White Wale of the Pacific (1839), which gathered eyewitness reports of an albino sperm whale that harassed whalers off the shore of Chile for thirty years before being killed by one.

For our Story of the Week selection, we present Poe’s early story, “MS. Found in a Bottle,” which is his first imaginative flight through a portal at the earth’s end.

Read “MS. Found in a Bottle” by Edgar Allan Poe 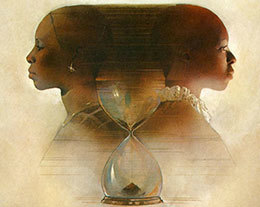