Back Jean-Luc Godard, Anna Karina, and the romance of crime in Band of Outsiders Print
Share
The Moviegoer February 22, 2017

Jean-Luc Godard, Anna Karina, and the romance of crime in Band of Outsiders

Jean-Luc Godard respected the text of Dolores Hitchens’s straightforward thriller Fools’ Gold even as he turned it into a quasi-comic romp whose real subject is its luminous star.

To Pauline Kael, Jean-Luc Godard’s Band of Outsiders triumphantly epitomizes what happens when a French poet retells “an American crime novel . . . in terms of the romance and beauty he read between the lines.”

It’s easy to see what she’s talking about. Fools’ Gold, Dolores Hitchens’s tale of a trio of inept novice criminals, is dark, tense, and claustrophobic. Godard’s adaptation is bright, sweet-spirited, and lighter than air. Still, in comparing the 1958 book to the 1964 film, it’s clear that Godard creates his seductive atmosphere by respecting the lines while he reads between them.

“Skip’s teeth gleamed as he smiled. He was small and wiry, a reddish blond with pale, stony eyes, and when he smiled he looked like a fox,” reads Hitchens’s description of the character Godard renames Franz, portrayed by the dark-haired but very fox-like Sami Frey. Franz’s last name is Kafka, and his pal Arthur (Eddie in the novel), played by Claude Brasseur, is surnamed Rimbaud. As for the distaff member of the trio, played by Anna Karina, Hitchens’s Karen Miller is called Odile, in tribute to Raymond Queneau’s novel of the same name.

The novel’s Skip and Eddie have clearly modeled themselves after the “tough guys” they’ve seen in the movies. Hitchens doesn’t go into specifics on that point, but Godard certainly does. Early on in the action Arthur mimes the death of Billy the Kid—arching and contorting his body, falling over and writhing in mock agony as if he’d just been shot and killed in a Western. At the climax, when Arthur actually is shot down, he not only repeats those contortions but makes them even more extravagant and melodramatic. For Godard, far more than for Hitchens, real life is indistinguishable from reel life.

Hitchens, unlike Godard, has no interest in the baroque. Fool’s Gold is a straightforward thriller about “the criminals next door.” Instead of dark cities, where crime novels are traditionally set, Hitchens’s tale unfolds in the suburbs—a place were there might well be a theft or two, but not perpetual pulp-fiction criminality. In this Hitchens was similar to fellow female noir novelists Dorothy B. Hughes (In a Lonely Place) and Elizabeth Sanxay Holding (The Blank Wall), who also took literary crime out of nocturnal back alleys and into the everyday.

Mrs. Haverman, the woman for whom Karen Walker works, is not an innocent, but a middle-class matron with criminal connections—a go-between who is keeping a stash of ill-gotten gains safe for another party. Said party shows up at the story’s end to confront the trio, who had hoped to abscond with the loot, and a shoot-out ensues. In short, Hitchens finds darkness where there ought to be light. Then Godard illuminates this darkness with his own youthful energy and critical judgment. Hitchens’s third-person narration explains precisely who is doing what to whom. Godard shoves this precision aside in favor of terse fast action, which he delivers in the form of a quasi-comic romp—a sub-genre he largely invented in Breathless (1960).

Breathless was derived from a news item Francois Truffaut and Claude Chabrol discovered and passed on to Godard. It told of a petty gangster who after killing a police officer risked capture by returning to Paris in order to see the girl he’d fallen in love with. Godard and his stars Jean-Paul Belmondo and Jean Seberg turned this mere anecdote into a gangster film that was at heart a romance. The gangster as romantic anti-hero wasn’t new. Bogart had played one in High Sierra (1941); likewise John Garfield in He Ran All the Way (1951) and above all Jean Gabin in Pepe le Moko (1937). But those performers enacted serious dramatic characters in crisis. Belmondo in Breathless is just eager to get Seberg into bed—the police in pursuit of him be damned. He’s closer to Cary Grant than George Raft.

Band of Outsiders has much the same blithe reckless spirit, with a difference. The romance at its center isn’t between two performers on screen, but between the leading lady and a writer-director utterly besotted with her. They had married in March of 1961. Godard’s adoring presence can be sensed throughout this movie, most strongly in three of the film’s most memorable scenes. In the first we see the trio race through the Louvre, trying to beat some imagined record for visiting the museum’s rooms in the shortest length of time. The second is the “moment of silence,” when the friends make faces at one another at a cafe table—and the silence is supplied by Godard turning off the soundtrack for a full sixty seconds.

Above all we feel it when the trio dance “The Madison” in a small, half-deserted café. Odile, Franz, and Arthur perform this line dance (a carefully calibrated series of jumps, turns, finger-snaps and hand-claps) to a catchy jukebox tune confected by the film’s composer Michel Legrand. Godard, whose narration throughout Band of Outsiders is both novelistic and analytic, waxes most poetic here. “Parenthetically, now’s the time to describe the character’s feelings,” he grandly declares, going on to note, “Arthur watches his feet, but he thinks of Odile’s mouth and their romantic kisses”; then “Odile wonders if the boys notice her breasts moving under her sweater as she dances;” and finally, “Franz thinks of everything and nothing. He wonders whether reality is a dream or dreams reality.” This isn’t ordinary narration, which conveys information the film for one reason or other can’t dramatize. Rather what Godard supplies is a commentary on the characters’ feelings—a kind of critical analysis built right into the work. There is nothing remotely like it in the text of Fools’ Gold.

If the Godard of Band of Outsiders is a poet, then Anna Karina is his muse. Born in Denmark where she first worked as a model, Hanne Karin Blarke Bayer moved to Paris, shortened her name and made plans to move from modeling to acting. Godard wanted to cast her in his first feature, Breathless. But the part (not the lead) required nudity, so she turned it down. Godard wasn’t discouraged, and his persistence paid off. Karina went on to star, fully clothed, in his second feature Le Petit Soldat (1960). In his third, the quasi-musical A Woman is a Woman, she does play a stripper—but unlike the other ecdysiasts in the film she’s never seen naked. As she strips the camera moves closer and closer to her until all we see is her face. (In A Woman is a Woman, Karina’s character longed for a child; in real life she suffered a miscarriage, leading to depression and the first of several suicide attempts.)

Forging ahead, Godard explored Karina’s emotional fragility in their next film, Vivre sa Vie (1962), where she plays a would-be actress who drifts into prostitution. One of that drama’s highlights is far from gloomy. In a pool hall, while waiting for her pimp to conclude a deal of some sort, our heroine joyfully dances around a pool table to a jukebox tune. She may flirt with a handsome young pool player all the while, but our eyes are always on her. Band of Outsiders goes Vivre sa Vie one better. In the Madison scene, Sami Frey’s Franz and Claude Brasseur’s Arthur gleefully join in, then ultimately poop out and sit down, leaving Karina’s Odile to dance alone. Frey was a bona-fide celebrity, both for his acting in Henri-Georges Clouzot’s La Vérité and his love affair with its star, Brigitte Bardot, and Brasseur had recently co-starred with Jean-Pierre Cassel in Jean Renoir’s The Elusive Corporal and with Jean Sorel in Yves Allegret’s Germinal. In Band of Outsiders they may function in the story as parts of a trio, but cinematically Karina is the star and they are her supporting players.

In Band of Outsiders the intense affection Godard had for Karina is palpable, and also, in filmic terms, inspirational. Consider this passage in Hitchens: “Karen sat down, adjusted her skirt across her knees. Her motions were deft and graceful.” Godard reproduces this skirt adjustment, making what were simple words on a page a major moment for his beloved. The camera seems to caress her hands, her limbs, her luminous face. One would be hard-pressed to describe what’s actually going on in the house the trio robs. But to Godard that’s no matter. All that matters is the actress playing the part.

“Karen was across the open space, near the house. The light from the little window high on the wall shone down on her, and Eddie could see the look of shock she had, the tear shine on her face and the frightened attitude of her body. When Skip walked toward her she backed to the wall.” To most directors, that passage from Fools’ Gold’s final act would be an invitation for virtuoso melodrama. Godard replaces what Hitchens spells out on a page with brief tense shots of physical movement (tying up Odile’s aunt and putting her in a closet), anxious close-ups (of Karina’s face) and gun-play viewed in medium long-shot, rather than close-up as in most gangster films. That’s because Band of Outsiders is as far as one can get from most gangster films—French as well as American. There’s no tragic anti-hero in the central role—just a young girl who might ordinarily be called a damsel in distress. She has her share of distress-filled moments, but she also triggers the film’s real action. And that action is the “Madison.” For Band of Outsiders is a gangster film with a mini-musical inside of it. Anna Karina is the star of that musical. As she and her cohort trip the light fantastic, they take us somewhere we’ve never really been before.

Video: Trailer for 2016 digital restoration of Band of Outsiders (2:11) 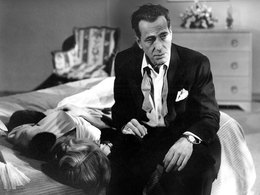 In a Lonely Place: Film noir as an opera of male fury