Since last July, the stars of the Broadway musical Hamilton have hosted impromptu and unpredictable performances at least once a week in front of the crowds who gather for the handful of tickets available via lottery before showtime (basically shutting down much of Manhattan’s West 46th Street in the process). The production company has uploaded video of these skits to social media under the hashtag #‎Ham4Ham.

As much of the country is aware, the show’s final performance featuring creator and star Lin-Manuel Miranda and co-stars Leslie Odom, Jr. and Phillipa Soo was last weekend, following the announcement of a new cast earlier in the week. And so last Wednesday, July 6, for his final #Ham4Ham skit, Miranda read from the Library of America edition of Hamilton’s writings. His selection? Hamilton’s August 1780 love letter to his future wife Elizabeth Schuyler (“Eliza”)—a letter Miranda jokingly refers to as “Fifty Shades of Grey by Alexander Hamilton.”

Miranda also explains why he chose this particular text to read in public:

It kinda captures everything I love about Hamilton. He’s kind of arrogant, he’s kind of insecure, he’s unbelievably romantic, it’s funny, it’s sad, and it’s basically him saying to Eliza, “Don’t marry me if you think you can’t be happy broke—’cause we might end up broke.”

If you don’t own the LOA volume, you can read the letter along with Miranda here—although we think his rendition makes a strong case for why you might want to invest in a copy of the book. (Admittedly, we’re biased.) 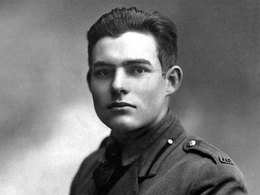 Shirley Jackson: A Rather Haunted Life